There are more than 500 green spaces in Venice, often an ancient legacy of aristocratic palazzi or religious buildings.

A surprising number because you don’t expect to see any gardens in Venice, the city of water, stone and brick.

Requiring no introduction, the Giardini Reali are the green lungs of the city’s Marciana district. Situated not far from the Piazza, they offer shaded benches and a moment of tranquillity at the foot of the “Paron de casa” (the city’s most famous bell tower).

A very well-maintained and welcoming garden can be found by the Museo Ca’ Rezzonico, a stone’s throw from Campo Santa Margherita and the Accademia. A small fountain containing some carp, a distinctive architectural design and comfortable benches offer a welcome break leaving you ready to resume your meanderings.

Parco di Villa Groggia is a perfect place to relax if you choose to tackle an itinerary that takes in the Jewish Ghetto, Fondamenta della Misericordia and the Madonna dell’Orto.

The Giardini della Marinaressa are also worth a visit: the gardens have beautiful gravel paths criss-crossing a lush and well-kept lawn in the shade of tall trees, all with an amazing view of the San Marco Basin.

Also highly recommended is a visit to the gardens of the Convento del Redentore, hidden behind the votive temple of the same name, erected by Palladio on the island of Giudecca, which are the only gardens to have preserved their original size (about one hectare); the Capuchin friars grow olive trees and grapevines, fruit trees, vegetables and herbs which were once used in the nearby pharmacy. Access to the water is on the south side, where a tree-filled garden overlooks the lagoon, and offers a great opportunity to relax and take in the magnificent view from the terrace.
A stone’s throw from the magnificent fifteenth-century church of Madonna dell’Orto, sits the grand bulk ofPalazzo Contarini dal Zaffo extending along Fondamenta Contarini: you can already glimpse the garden through the imposing grille. It is positioned between the Misericordia Marina and the tranquil waters of the northern lagoon, and has as a backdrop the unmistakable silhouette of the island-cemetery of San Michele (visits by prior arrangement with the nuns). In the district of Dorsoduro, the garden of Palazzo Giustinian-Brandolini d’Adda , created by its owners in the late nineteenth century, is protected from curious eyes by a grove of laurels, yew trees and horse chestnuts, while boxwood has been used to create a magical maze. In the background, the rear façade of the building is completely covered with a century-old wisteria. 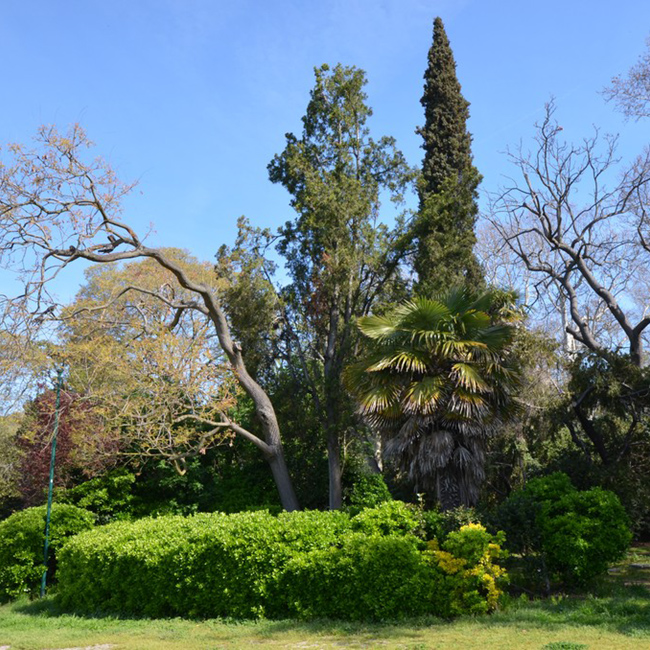 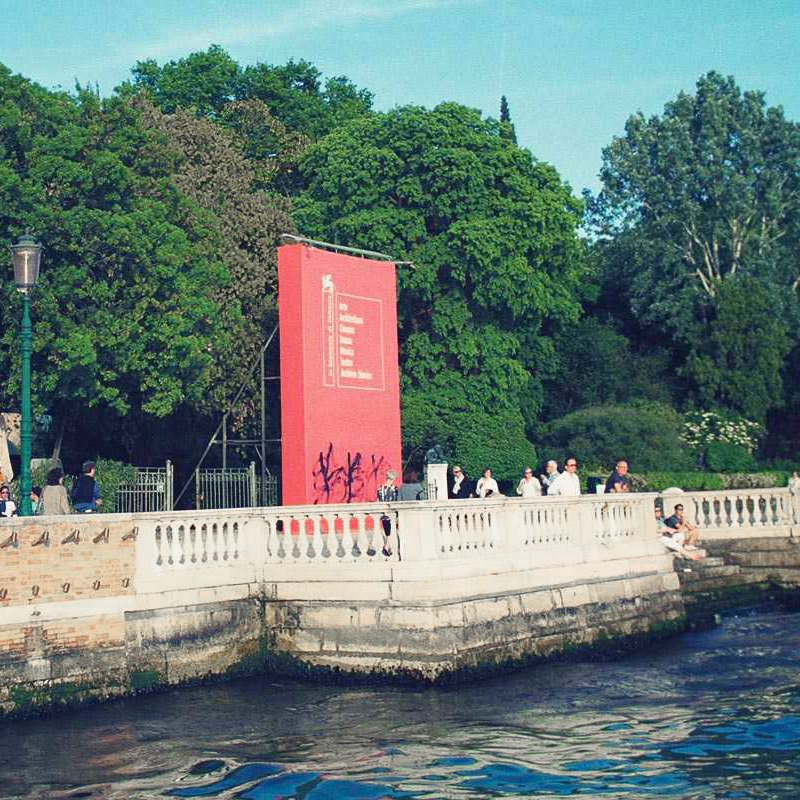 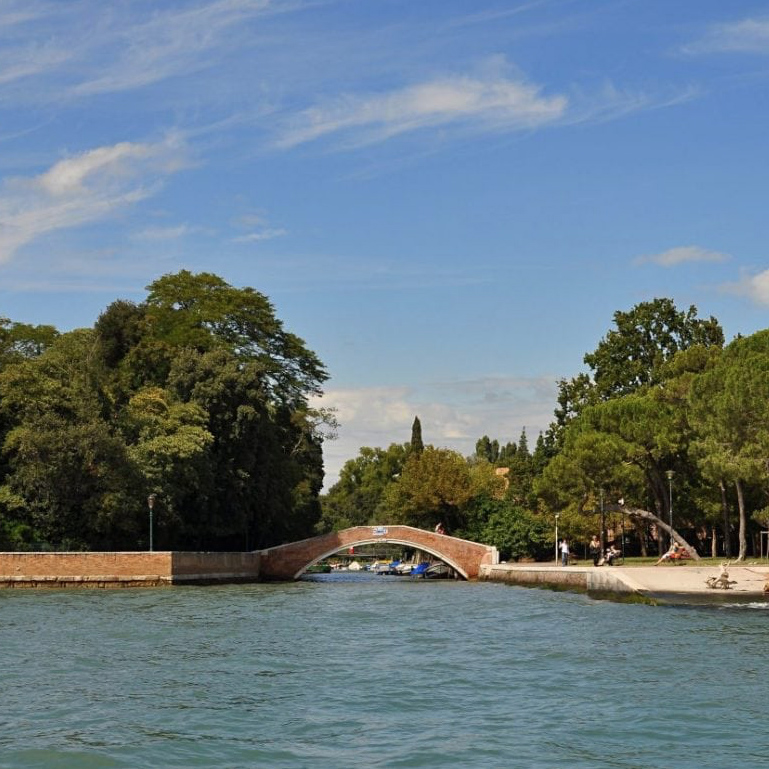 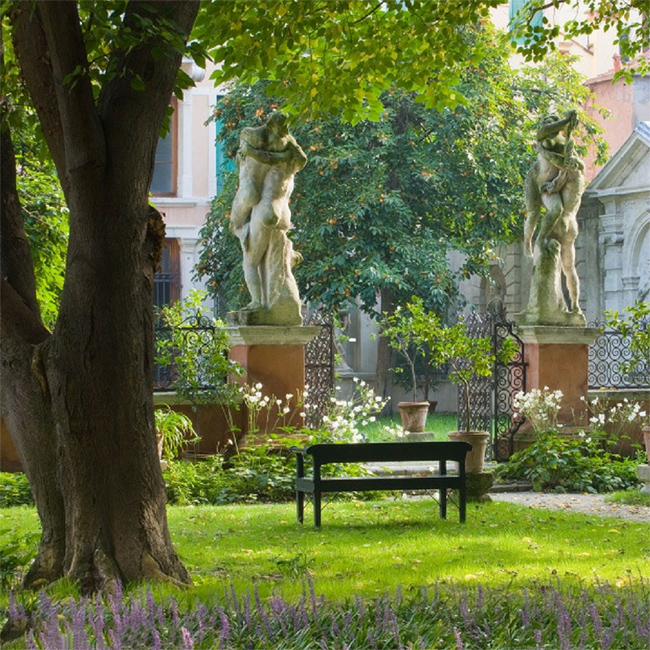 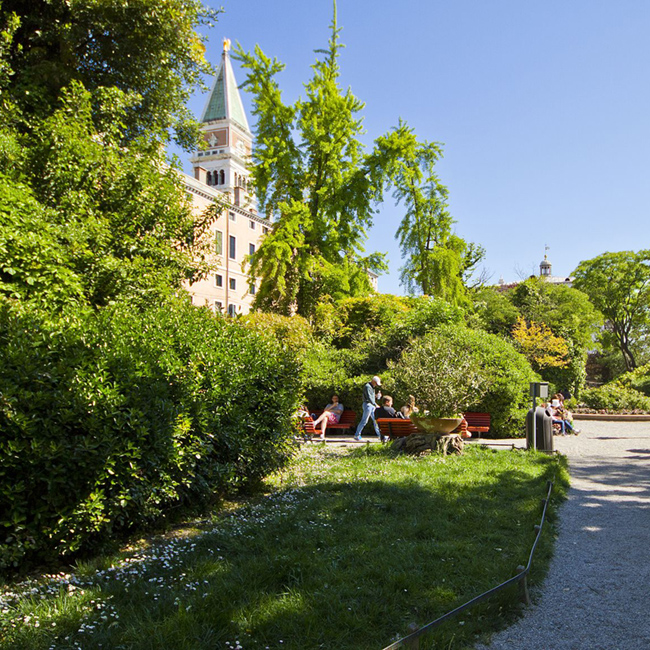 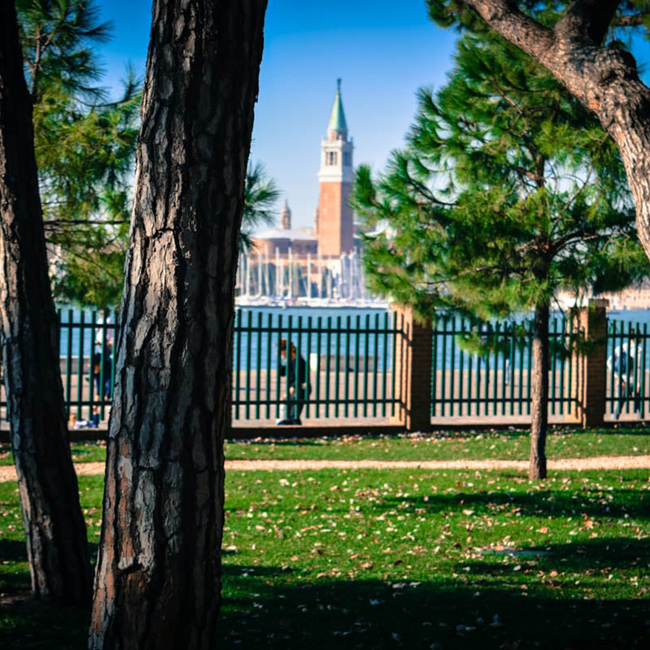